Up until about 5-10 years ago, the performance gains in computers were huge from one generation to the next. Tasks that took all night soon took an hour, then 15 minutes, then 3 minutes, and so on. You felt these and they changed the way you worked. Eventually, hardware got beyond the point where it changed what you did and just became an “oh that’s nice” effect.

I recently decided, after months of hemming and hawing, to replace my main workstation in my home office. The previous one was a c2008 midrange Dell that has served me well. I had been using some better hardware at my job, a decent desktop with an SSD and then a decent laptop, also SSD. When I went freelance, I splurged on the best laptop I could find, with the exception of it not having an SSD, but rather twin 7200rpm drives in RAID 0. It has an amazing 17″ screen, 8GB RAM, i7 CPU, etc. It ran me $3200, and I figured I’d replace the drives at some point rather than spend the extra $1k from the manufacturer. I wasn’t in any rush because it felt as fast as my previous SSD boxes so I wasn’t anticipating it being worth the expense, much less the time spent reinstalling.

As for my new desktop, I went similarly all-out. It’s an i7-2600k, 16GB Corsair Vengeance 1600MHz RAM (the most you can reasonably buy at the moment), 2 x 120 GB Intel 510 SSD in RAID on an MSI Z68A-G65 mainboard.  The video card is an nVidia GTX 460 SE, which is not really in the same league as the rest of the hardware but this is primarily a work computer.  600W power supply, Cooler Master HAF X case, and Windows 7 Professional and it came in at about $1800 altogether, which actually isn’t bad. It was very easy to put together, probably 90 minutes, and booted fine the first time I powered it on.

I’ve been using it for the past day, and the difference is astonishing. It’s not just fast, it’s different, and I think I’ve just figured out why.

The most important performance metric for modern workstations isn’t how fast it completes arbitrary tasks, it is the percentage of how many of your tasks completely instantly.

This computer, compared to every other computer I’ve used, Macs, PCs, Linux, whatever, does far more things without any delay whatsoever. So much so that my rhythm is off and I’m actually a little uncomfortable at the moment (I know this will pass).  The familiar delays I was used to, even when they were 50-100ms, whether opening a file or pulling up an autocompletion are gone.

I guess my point is that if you spend all day on a computer and think that there’s no point in upgrading any more except to replace things that break, I think you will be pleasantly surprised if you decide to splurge a bit.

I’ve been spec’ing out a new desktop and am intrigued by something I’m not sure I’ve seen before. It’s actually possible to get a computer with too much RAM now. 32GB is not really high-end, or expensive, and yet I can’t really think of any consumer/business application that would use that. Programs like photoshop or video editing or scientific engineering software have pretty much infinite appetites, so those programs would really be a question of diminishing returns.

As for me, I could literally put an an entire Windows 7 virtual machine on a RAM disk* with a ton of code, some decent-sized databases, and give that VM 4-8GB of RAM, and still have physical memory to spare. That said, I’m certainly going to get (at least) 32 because it’s a cheap upgrade from 8 or 16, so if I find a use for it, I’ll report back.

Making claims about the future can haunt you forever, even if you didn’t actually say it, so I’m not saying that we’ll never need 32GB, of there will ever actually be such a thing as “too much RAM” but I’m curious how long it will be until we do.

*You might think that the RAM disk is dead with the availability of SSD, but RAM is still dramatically (50-100x) faster than even high-end SSDs like Fusion-io, thanks to the limitations of the SATA or PCI bus. 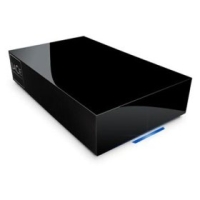 I recently bought a 1TB Lacie Hard Drive that was “designed” by Neil Poulton. I imagine that the design session went something like this:

Lacie: “Neil, we need you to design a hard drive for us”
Neil: “Excellent! I’ve got a brilliant idea!”
Lacie: “Tell us!”
Neil: “Well, I will tell you but you have to put my name all over the box, and not put anyone else’s name on it. Especially the people that are actually going to work late nights and weekends to do the engineering required to make this piece of commodity hardware fit into my stunningly brilliant design”
Lacie: “Sold!”
Neil: “OK, here it is, picture in your mind a shiny black rectangle”
Lacie: “I love where this is going!”
Neil: “Now picture in your mind a blue light”
Lacie: “Ooooh, sexy”
Neil: “Excellent, I’ll send over the invoice”
Lacie: “…”

I recently picked up, and am liking, the new “wafer thin” aluminum keyboard from Apple. Its very small, I like the key action and it’s very solid considering it’s size and thickness. But, I use it on Windows, and there’s no driver available other than the standard keyboard one, so the extra keys like media controls aren’t enabled. I came across a freeware macro program called AutoHotKey that works very nicely, and wrote up a few little scripts for it. You can download AutoHotKey and run the scripts yourself, or you can download the compiled version here [enable_mac_aluminum.zip, 193KB] and just pop it into your Startup folder.

Update: Reader Svolte points us to SharpKeys, which (by default) maps F13 to print screen. The advantage of doing this is that alt-print-screen (capture just active window) works, while I was unable to replicate with the AutoHotKey script.

I find as I get older my keyboards get smaller and my monitors get larger (and more numerous).

A few weeks ago I picked up 2 TB TeraStation Live, and so far I have to say I’m very happy with it. I got it for $800 from buy.com, which puts the whole device at about $400 over the price of it’s 4 500GB hard drives. I think that premium is well worth it.

It was very easy to set up, at least for someone with a base knowledge of setting up a file share. The administration is done via a slow, clunky, but straightforward and ultimately effective web UI. I have set up a few different shares with varying permissions, and haven’t had any problems so far. Among its nice/key features are the fact that it is virtually silent, has gigabit networking, and isn’t too big, about the size of a mini-tower PC.